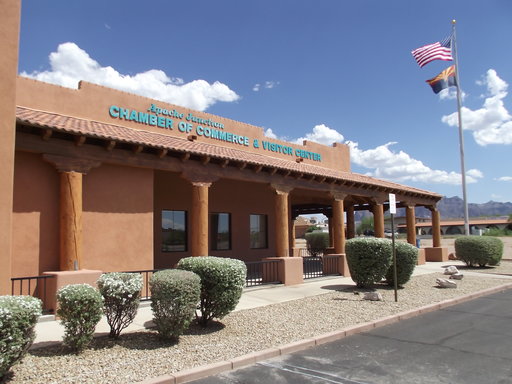 The mission of the Apache Junction Area Chamber of Commerce is to promote, develop and unite the business community in and around Apache Junction, Gold Canyon, and East Mesa to accomplish economic growth.

A business community that is vibrant, healthy and economically prosperous through a Chamber of Commerce that is effective, responsive and progressive.

Although the city did not incorporate until 1978, the Chamber was officially incorporated in 1960 and was located at 201 W. Apache Trail, which we know today as the Parkway Plaza. Sometime in the 1950’s, several Apache Junction businessmen decided to start a Chamber of Commerce. In June 1960, the Apache Junction Chamber of Commerce formed for the purpose of fostering and promoting social, economic, commercial, industrial, agricultural and civic interests of the area of Apache Junction and Pinal County, Arizona. The group appointed Ruby Forsberg as the first office manager. The Chamber “office” was a drawer in her desk at the company where she was employed. It is thought to have been either a real estate office or a Salt River Power office, unable to find a record of the company name. The Chamber office remained in Ruby’s desk drawer until 1980 when the chamber purchased a building at 1001 N. Idaho Road.

In June of 1994 the city purchased that property from the Chamber and it became part of the city hall complex, as plans were already being made to buy land to build a new Chamber building. The city leased the old library at 112 E. 2nd Ave. to the Chamber from 1994 to 2001, until the new Chamber building was completed. Construction of the current Chamber building at 567 W. Apace Trail was started in July of 1998. The Chamber received the approval for occupancy on July, 11 2001 and the move-in was completed by July of 2002 for 567 W. Apache Trail, where the Chamber of Commerce and the Visitor Center remains today.

Today, the Apache Junction Area Chamber partners with federal, state and local entities, community organizations, and the business community to create an environment that is attractive to positive economic growth and opportunities. With the support of our members, the Chamber will continue to represent their interests, develop programs that give value to their membership, and give members the needed support that allows them to grow and prosper.In the early 1960s, a flourishing business community was forming along the Apache Trail. In June 1960, the Apache Junction Chamber of Commerce incorporated for the purpose of “fostering and promoting social, economic, commercial, industrial, agricultural and civic interests of the area of Apache Junction, Pinal County, Arizona, and its trade area.” As with most chambers of commerce, business leaders felt the need for representation as a business community, and for a group to promote the then-unincorporated community of Apache Junction.It doesn’t get any better than this. In the shadow of the majestic Superstition Mountains, the Apache Junction Chamber of Commerce represents a diverse group of businesses located in a varied geographic region extending east of the metropolitan Phoenix area in Pinal County.

Celebrating 60+ years in operation, the Chamber offers benefits and advocacy for over 350 Chamber members. Serving the areas surrounding Apache Junction, the Chamber facility also houses the Apache Junction Visitor’s Center. This Arizona Office of Tourism designated visitor center accommodates over 35,000 visitors annually while receiving thousands of phone calls and distributing information for relocation and tourism throughout the world.

The Apache Junction Area Chamber is focused on giving the business community the opportunity to affordably advertise and network while advocating for business on a local, state and federal level. The EVCCA (East Valley Chamber of Commerce Alliance) represents more than 7,500 member firms from the Apache Junction, Cave Creek/Carefree, Chandler, Fountain Hills, Gilbert, Mesa, Queen Creek, Scottsdale and Tempe Chambers of Commerce. Its purpose is to provide coordination and to advance the common business interests in the East Valley.

We would like to thank our current members for their support. If you are a non member, please consider joining. We are committed to making Apache Junction a great place to live, work and prosper.